We’ve all been there, clicking on a story, reading it, and then following links to related stories. Soon you are doing searches for the topic, and falling farther and farther down the rabbit’s hole. That’s what happened to me a couple of weeks ago when I came across the Hemingwriter (now called FreeWrite) Kickstarter project.

The Freewrite is billed as the ultimate distraction free word processor, using a cherry MX keyboard (there are a multitude of switches used in keyboards, and the good ones usually start with cherry) and an e-ink display. The display was what I found intriguing. E-ink displays are used on all of the black & white e-book readers such as the Amazon Kindle and Barnes & Noble Nook. The advantages of the e-ink display include the ability to be used in direct sunlight and the low power consumption. An e-ink display only requires power to update the display. Once the display is updated, it no longer needs any power to keep an image. That is why when you turn off the Kindle or Nook the display will change to a book cover or something.

eBay and I have a very deep and meaningful relationship. And that relationship is based on the procurement of retro tech gear. I started looking for devices that could be used as a distraction free word processor. Two things it had to have: the ability to be used in direct sunlight and a battery life measured in days instead of hours. 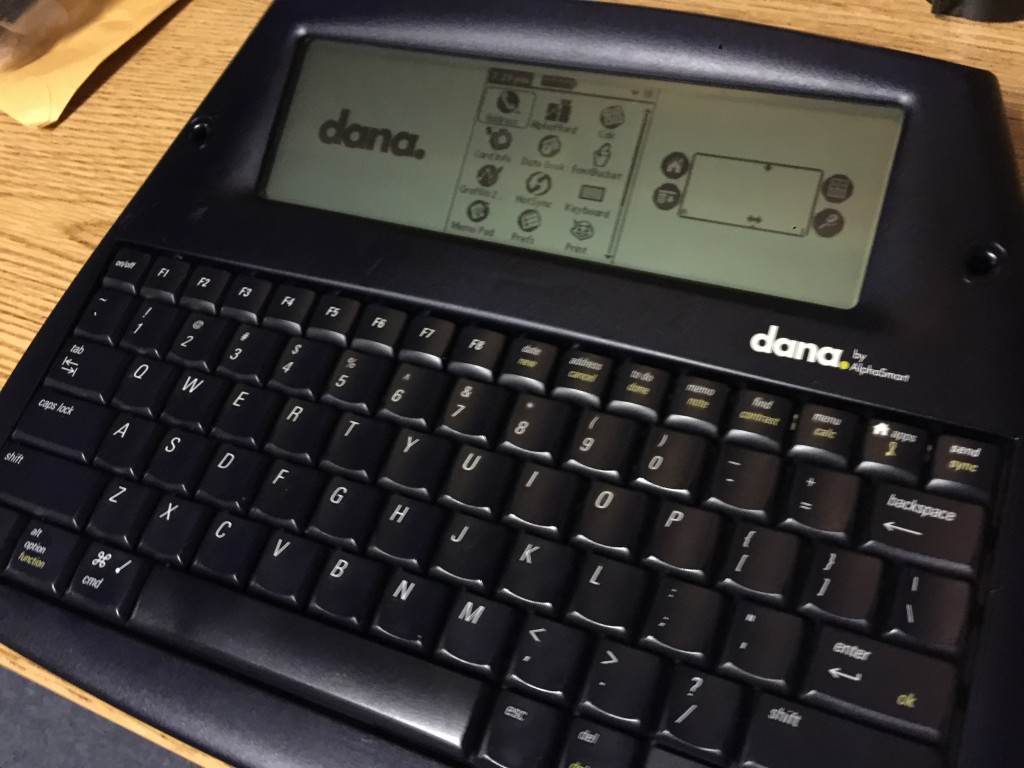 I vaguely remembered the Alphasmart Dana being released. It was an Alphasmart dedicating word processor that ran the Palm OS operating system. Earlier Alphasmarts were very much a one-trick pony, giving the user 8 slots in which to save documents and not much else. The Dana upped the game by allowing the user to run regular palm apps instead of just a word processor.

A week and $26 later, an Alphasmart Dana was at my doorstep. Unfortunately, the power pack was dead. I tried putting 3 Panasonic Eneloops into the battery bay, but it would constantly say they were out of power. I found out that the Dana treats AA batteries in the battery tray differently than the NiMH battery pack that also goes into the battery tray. Eneloop batteries are pre-charged NiMH that can usually be used in place of alkaline batteries. This falls apart with the Dana, since it looks for the 1.5v that an alkaline AA battery releases normally and complains about the 1.2v that a rechargeable battery puts out.

So, I did what any self-respecting geek would do, and tore apart the batterypack the Dana shipped with and replaced the cells with the Eneloops. The original battery pack was rated for 1630mah. Each Eneloop is rated for a minimum of 1900mah, so I’m assuming I’ll get at least three times the battery life out of my new pack over the original pack.

I’m typing this post on the Dana, and it works very well so far. Since I write using Markdown, I don’t need to worry about any formats when I transfer it over to the computer to post. There are two ways I can transfer the documents. The first way is to use plug the Dana into my computer with a USB cable. Once connected, the Dana switches to keyboard mode, where it can act as a keyboard, or, more importantly, send a document over to the keyboard as if it’s being typed. To do this I’ll need to make sure a word processor is opened first. The other way to transfer is to grab the documents .pdb file off of the SD card. This is the route I’ll probably use because it will be faster. My documents will be in plain text, so it won’t be hard to get the data out.

As far as distraction free writing goes, this experience worked pretty well. I can’t switch to a browser or IRC window. I can’t check up on my RSS feeds. All I can do is write, and I’m very fine with that.