On May 2nd, Microsoft held an education focused event to announce several initiatives. During the presentation they discussed several new and upcoming products aimed at the educational sector. 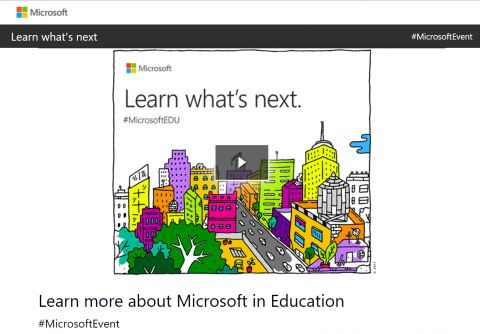 To sweeten the deal, Microsoft also offers a free year of MinecraftEDU with Windows 10 S.

Microsoft Intune is Microsoft’s answer to Google’s G Suite Admin for Chromebooks. From Intune, districts can manage the Windows devices in their district for $30 per device. Microsoft also offers a subscription rate based on the number of students in your district if you prefer, or if you want more features. For example, Intune does not manage users, you will still need to run Active Directory somewhere. The prices I saw put it at approximately $12 per student to run Azure Active Directory in the cloud and Intune, allowing you to manage all of your users and Windows Devices in the cloud.

Argh! Apparently Microsoft doesn’t view educational professionals as smart enough to deal with the term augmented reality, and kept on using the term mixed reality in their presentation. I’ll use their term, but I’m not happy about it.

Mixed reality overlays computer graphics onto the real world. To produce these graphics Microsoft showed Paint 3D and an upcoming version of PowerPoint that can handle 3D objects. As much as I hate Microsoft for using the term mixed reality, the demo looked like it could be really useful in the classroom.

Microsoft’s answer to Slack, Teams is a place for collaboration and sharing. Microsoft is positioning Teams as an LMS, but is pretty different from any LMS out there. It will be interesting to see how well Teams work outside of the demo they showed.

Microsoft is really taking the Chromebook threat seriously, and with the updates to Office and the release of Windows 10 S they’ve put together a formidable combination. If you are currently a Windows district, Windows 10 S and Intune look to be no brainers. It will be a tougher sell for Google districts, but there is nothing that says you can’t do both! Well, except for the fact that Google Chrome is not in the Windows 10 Store, so you will have to use Edge under Windows 10 S as your browser.

The presentation can be viewed at event.microsoft.com/MayEvent?ocid=MicrosoftEvent.