Boxy SVG is an offline vector graphics editor for Chrome

Boxy SVG lets you edit vector graphics in Chrome without an internet connection. 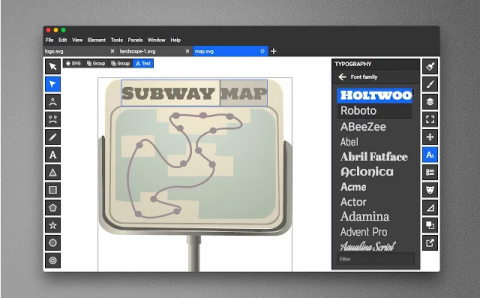 There are two different ways of how the computer renders graphics. One is bitmap or raster images, which include .jpg, .png, and .gif. Raster images take a graphic and view it as a combination of pixels to form the image. This allows complex graphics such as photos to be stored economically in a computer at the expense of flexibility in resizing the image. There are different algorithms to resize raster images to different sizes, but blowing them up to a large size or shrinking them loses quality. Programs that deal with raster images include Adobe Photoshop, Picmonkey, and Pixlr.

The other way a computer can render graphics is called vector images. These images use math to tell the computer what to draw. So instead of plotting pixels, a vector says, draw a line from here to there, then bend it. Vector images can be resized to any size, without a loss of detail. Programs that deal with vector images include Adobe Illustrator and Inkscape.

Boxy SVG is a vector graphics editor for Google Chrome. With it, a student can do a lot of things that they could do with Adobe Illustrator or Inkscape, two apps that don’t run on Chromebooks.