Less Apples for the teacher 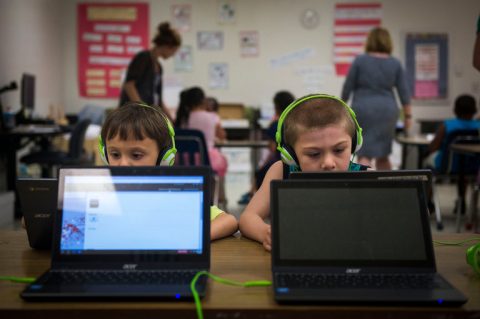 Apple is losing its grip on American classrooms, which technology companies have long used to hook students on their brands for life.Over the last three years, Apple’s iPads and Mac notebooks — which accounted for about half of the mobile devices shipped to schools in the United States in 2013 — have steadily lost ground to Chromebooks, inexpensive laptops that run on Google’s Chrome operating system and are produced by Samsung, Acer and other computer makers.

Apple was THE choice for the classroom in the since the beginning, but now it appears they don’t want to compete. And it’s not that they don’t have the hardware or software, it’s the fact that the iPads are designed for use by one person only, and that they are too expensive.

This is the year Android comes to Chromebooks, so the decision of whether you need a table or a laptop goes away, because you can get both. Keep in mind that a Chromebook as a tablet is not going to be a nice tablet, but it will do in a pinch.

I keep on hoping that Apple will decide to compete, and maybe they will if/when the MacBook moves to ARM processors. I’m not going to hold my breath though.