The more time we spend on our phones, the more text messaging seems like a natural artistic medium, a modern outgrowth of the epistolary novel. You can see it in the fake text messageweb fiction genre, in games like Sarah is Missing… and in the silly quasi-interactive thriller that a smartphone writing app has somehow seduced me into creating.

The app I’m talking about is called Tap, a recent extension of the existing trend of text messaging fiction platforms. It’s following on the heels of a very similar service called Hooked, and less directly, the kid-focused Amazon Rapids. On both Tap and Hooked, you get what looks like a text message interface, with messages advancing as you tap a box at the bottom of the screen. It’s not like a video game with different choices; it’s more like a play or radio drama that happens to take place on your phone.

Source: I wrote a text message thriller, and so should you – The Verge 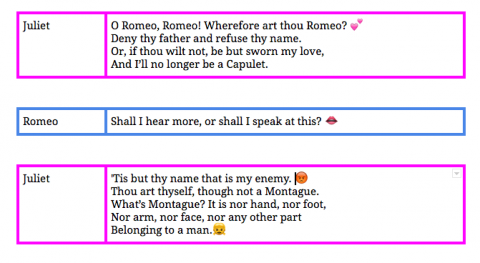 I create a one row table with two columns in Google Docs, and then changed the size of the borders and color.

Writing stories in this format could be a fun activity outside of  normal story writing.