My new laptop is an Asus Chromebook C302

My new laptop is an Asus Chromebook C302. 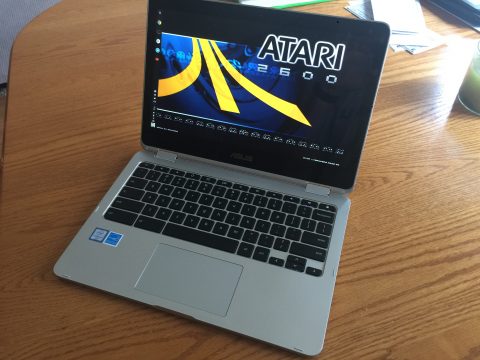 I’ve bounced between macOS and Linux for my laptops over the past 10 years. My latest laptop was a Lenovo Yoga 11″, on which I ran Ubuntu Mint a majority of the time. I could dual-boot into Windows, but I very rarely did that. Last spring I bought an Asus Flip Chromebook after Google announced that Android apps were coming to Chromebooks. I loved the form factor, and it was about the perfect size for me for a laptop, but the performance just wasn’t there.

I upgraded a 2010 Macbook Pro that I had to use as a back up to my Flip, but I was ready for something lighter and that had high performance with long battery life. Apple’s update Macbooks weren’t announced yet, so I decided to wait for them. Unfortunately, the new Macbooks just weren’t that exciting. They were just too expensive for what I wanted to spend. At about the same time, the rumors were growing for Samsung’s Chromebook Pro.

My needs in a laptop have evolved over time, to the point where I can do a majority of my work in a browser and with secure shell (a command line tool to access remote systems). I have a Mac mini desktop, so I started to look at Chromebooks. The Samsung Chromebook Pro had something that I was very interested in, a 3:2 ratio screen.

A laptop’s screen ratio is the ratio of the width of the screen to the height of the screen. A 1920×1080 laptop would have a ration of 16:9, wide and not very tall. iPad’s have a 4:3 ratio, which is pretty square. The benefits of a 4:3 or 3:2 ratio is the ability to show more information vertically. A downside is the appearance of large black bars when viewing widescreen content. This isn’t that big of deal for me, I would rather have more vertical space. With this in mind, I started waiting on the Chromebook Pro. And waiting. And waiting.

It became May, and the Samsung Chromebook Plus had been released, but I was still going to wait on the Pro. The Plus has an ARM processor, not Intel, which meant that it was lower performance than the Pro would be. This also meant that there would be some complications for me since I was planning on running Linux on the Chromebook with Crouton. I had been looking at the Asus Chromebook C302, but the 16:9 screen was holding me back. Eventually, I couldn’t wait anymore, and bought the C302.

For $499 (it’s now currently listed for $469) I received an Intel m3 based Chromebook with 4GB of RAM and 64GB of storage. It is a 2 and 1 convertible model, which means the screen flips all the way around and can be used as a tablet. It’s a pretty big table, and heavy, so I don’t use it as a tablet much but it’s nice to have the option. Size wise, it’s not much bigger than the Macbook Air 11″. 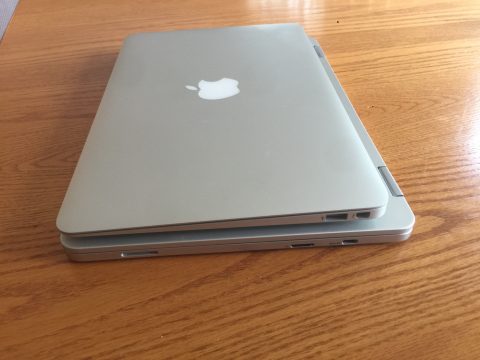 For the two months I’ve had it, I haven’t found any real deal breakers, except for the wide screen. Since it only has USB-C ports, I did have to buy a dongle, but I wouldn’t list that as a negative since USB-C is the direction laptops are going. My dongle adds to USB 3.0 ports and an HDMI port. It was fairly expensive $53, but I should be able to use it with any laptop I purchase in the future. I already have a USB 3.0 ethernet adapter, so ethernet is covered for those rare circumstances where I did an ethernet connection.

ChromeOS pretty much covers everything I need to do, and Linux in Crouton covers almost everything else.

I’m very happy with my purchase. The Asus Chromebook C302 is incredibly fast and when running ChromeOS beta, I also have access to Android apps. Its light, battery life is great, and the keyboard works very well.

P.S. Links to Amazon have an affiliate code embedded.