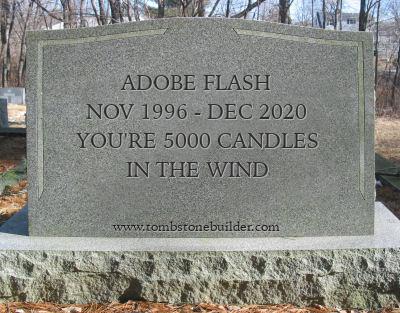 Today is the day that Adobe end-of-lifes one of the greatest and most frustrating of internet technologies, Flash.

Flash was great in the late 90s, allowing web developers to create interactive, good looking websites. YouTube took Flash to a new level by allowing video to be played easily. The downsides for Flash are many. The security was lacking, allowing all sorts of hacks to happen. Text browsers and screen readers, such as those used by the blind, couldn’t use Flash based sites. The death knell started with Steve Jobs and the iPad. After three years of not supporting Flash on the iPhone, Steve Jobs wrote his Thoughts on Flash

Flash was created during the PC era – for PCs and mice. Flash is a successful business for Adobe, and we can understand why they want to push it beyond PCs. But the mobile era is about low power devices, touch interfaces and open web standards – all areas where Flash falls short.

In the first few years of the iPhone, pundits around the web kept claiming (hoping?) the Apple would have to buckle under and support Flash. The chorus became even louder with the release of the iPad. In the end, open technologies won, and Flash will be relegated to a footnote in the history of the world wide web.

Although Adobe is ending support, Flash will still rage against the dying of the light for a few more weeks and months. Version 88 of Google Chrome will completely remove Flash on it’s release, scheduled for January 19. Microsoft will begin offering to remove Flash from Windows in earl 2021, and change the wording to recommended a few months later. During the summer of 2021 Microsoft will remove all support of Flash from the Windows operating system. Firefox 85 will ship without Flash support on January 26th. Up to date Mac users are already living the Flash free life. Support for Flash was removed in the Safari 14 update released back in September for Mojave and Catalina, and in November for Big Sur.

What does that mean for you? It’s going to be impossible to run Flash in the browser. Most sites have already transitioned to HTML5, and open set of specifications for web content. As you plan for your classroom, be sure to double check that the site you want to use is still available. One way is to turn off or disable Flash in the browser. You can also navigate to the site and right click on the animation or resource you want to use. If the menu that pops up mentions Flash, then the site is still using Flash and won’t be usable in the near future.

There is currently work going on to preserve the history of the world wide web. The Internet Archive is currently archive Flash games, animations, and toys. They are converting the old Flash files to HTML5. While this will allow the artifacts to be used in modern browsers, there may be issues with the conversion. However, this will get better over time.

When Flash was released, it was a needed technology. But, as the web advances, proprietary technologies usually get clobbered by open standards.

Here’s to Flash, thanks for all the memories.