3. Participate in a Twitter chat (13 Ways Teachers Can Hack Their learning)

Participate in a Twitter chat is part 3 of a 13 part series, 13 Ways Teachers Can Hack Their Learning. 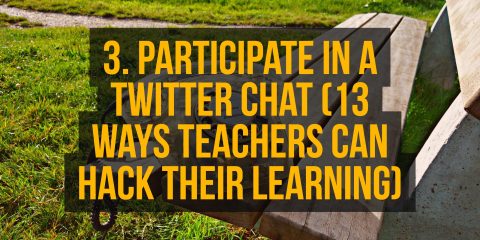 Although I touched on Twitter Chats yesterday, today I want dig deeper into what Twitter chats are and why you would want to participate.

When Twitter was first released to the world, it was labeled as a micro-blogging service, allow you to post your thoughts, moods, information in short bursts of 140 characters. @mentions and hashtags did not exist to Twitter. What I mean by that, users started to use @mentions and hashtags, but there was nothing in Twitter at first to do anything with them. Twitter soon added notifications for @mentions and a way to search for hashtags.

Hashtags are a holdover from Internet Relay Chat (IRC), an online communication system that started in the late 80s. Rooms in IRC were designated with a hash or pound sign before the name of the room. Each room would, more or less, be designated to that topic. IRC has seen an increase in users over the last few years thanks to an increase in the need of security with communications and  the rise of IRC like networks such as Slack and Gitter.

In Twitter, hashtags are used to associate a tweet with a topic. An example would be #mathchat, which would designate that the tweet had a math education focus. A Twitter chat expands on this idea, but designates a scheduled day and time for the chat. A self-appointed moderator or moderators will usually have prepared 8-10 questions to be covered over the time of about an hour.

When you join a Twitter Chat, you have access to experts and beginners alike. These people are very supportive of education and can offer insights outside of your local professional circle. It is advantageous to collect outside ideas and opinions. Not do they help you make better decisions, but they also can be a source of support when you’re trying something new and it’s not working.

A majority of the chats are not technology oriented, but separated by various departments and populations that occur in a school system. There are specific ones for subjects, or you can find them based on grade level. You should be able to find a Twitter chat that fits your needs!

How do I join a chat?

If I wanted to be mean, I would say go to Twitter.com and search for the hashtag you want to join. This works, but is a pain. The biggest problem with this format is that the tweets come up in reverse chronological order, with the newest at the top. When a group of tweets come in, you have to jump down on the page, read left to right for the tweet, then jump up the page to the next tweet, and so on. A very unnatural way to read.

Once you join, you are greeted with an interface much like instant messaging. 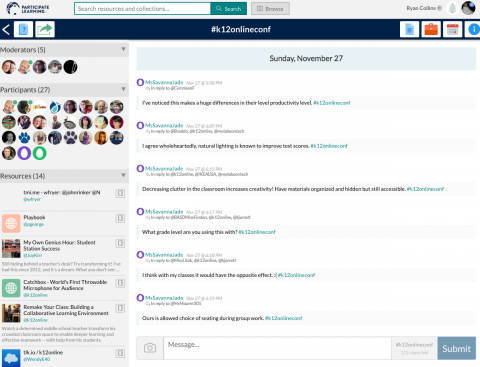 Participants in the chat show up on the left side, along with all of the resources (links, pictures, etc.) that have been shared in the chat. When the chat is over, you can create a collection of these resources, along with saving a transcript of the chat for later reference.