First look at the micro:bit, a single board computer for the classroom

First look at the micro:bit, a single board computer for the classroom. 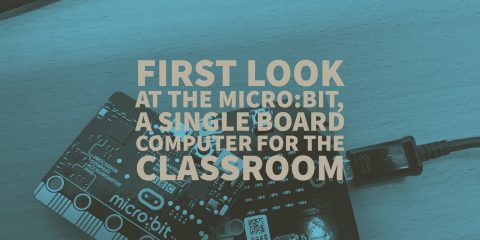 I first wrote about the micro:bit in 2016, but since it wasn’t available in the United States, I didn’t have one to play with and promptly forgot about it. This past week I was reminded about it after reading an article from the Def Con hacking conference where a micro:bit was used to hack drones. A quick visit to the web shows that the micro:bit was available at Micro Center for $12.99.

The micro:bit is a single board computer with 25 red LEDs arranged in a 5×5 matrix, two buttons, an accelerometer, and a compass. It connects to other devices through a micro usb connector or over Bluetooth. There are also three exposed connectors that can be used to connect other sensors such as a thermometer or moisture sensor.

The 20 pin edge connector can be used for PWM outputs, GPIO pins, analog input, SPI and I2C. To use these connections you will be required to purchase an edge connector breakout board, such as this one.

In the UK, the micro:bit is now given to every year 7 student (11-12 year olds) as a way to learn coding and logic. The micro:bit website has a ton of resources and curriculum ideas to help you get started. On the programming site there is a micro:bit emulator that allows you to run your program in the browser for debugging purposes before the code is downloaded onto a micr:bit.

Instead of ordering a micro:bit, I decided to swing by my local Micro Center on the way to the Ohio State Fair. And by local, I mean after a 70 mile drive. When I got to Micro Center, I headed to the maker section of the store where I saw not only the micro:bit for $12.99 but the micro:bit go kit for $16.49. The go version includes a battery holder, batteries, and a micro usb cable. At only $3.50 more, I bought the micro:bit go. 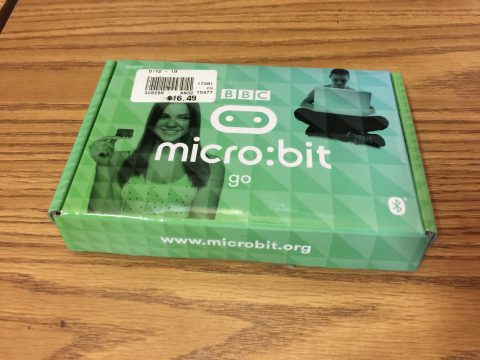 Once I got to the State Fair, I had a little down time so I decided to check out what I could do with only my iPhone and the micro:bit. Yes, I did bring the micro:bit onto the fairgrounds with me, along with a USB battery pack, a DS lite, an mp3 player, and headphones. Surprisingly, the state troopers didn’t raise an eyebrow as I emptied my pockets to go through the metal detector.

Surprisingly, the micro:bit is programmable from the iPhone, using a combination of the https://makecode.microbit.org website and an app on the phone which downloads the code to the micro:bit.

I programmed a few little programs, and came across pretty impressed with what you can do with the micro:bit. The micro:bit can be programmed from the blocks editor, using Javascript, or by using Python.

What about the Raspberry Pi or Arduino?

An Arduino is a single board computer much like the micro:bit and that can be purchased at a cheaper price. But, the Arduino does not have any sort of built in user accessibility like LEDs for display or buttons for input. Any connection has to be built.

The two single board computers shouldn’t be compared, because they have two different purposes. For students, the micro:bit is more accessible than the Raspberry Pi. When a student is given a single micro:bit, that’s all that is required to start coding.

I could see a progression for students, using the micro:bit as a starting point, and as students show aptitude and interest, they can graduate up to the Raspberry Pi depending on their needs and projects. If you add the edge connector to the micro:bit, you get a lot of the same capabilities of the Arduino in a package that is familiar to students.

If you are looking at a powerful way to bring coding into the classroom, the micro:bit is a device that you should check out. It’s inexpensive enough to outfit an entire classroom, but still powerful enough to have real-world applications.