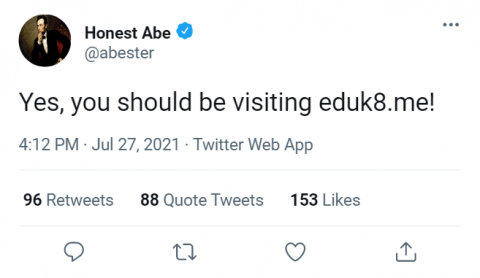 The Fake Tweet Generator lets you create graphics of Tweets. They look really, really, good, as you can see above. Fake tweets can be used in student projects to emphasis information from famous people or places. I would not recommend using it to create tweets from living people to trick others.

The generator could also be used in a lesson on validating source material. For example, you could use the Fake Tweet Generator to generate some tweets and compare them to real tweets.

When examining tweets, the biggest giveaway is whether the tweet is embedded or a graphic such as a screenshot. Since tweets downloaded from the Fake Tweet Generator will always be graphics, that’s a pretty good indicator on whether it’s a real tweet or not. Next up is to see if the account actually exists on Twitter. I randomly created @abester because I thought it sounded funny, but it’s an actual account. The account isn’t verified and it hasn’t tweeted since 2015 though.

I examined the fake tweet and real tweets, and I couldn’t find any real difference that stands out. All the more reason to be weary of any tweet that doesn’t link back to Twitter.