I, for one, welcome our new voice assistant overlords 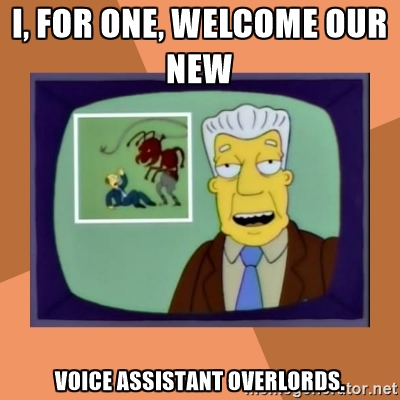 Articles about new technologies in the general media usually fall into one of two categories: breathless, this-is-the-coolest-thing-ever puff pieces or those it’s-gonna-kill-you-if-you’re-not-careful apocalyptic warnings. Occasionally writers manage to do both at the same time, but that’s rare.

A recent piece in the Washington Post leans toward that second theme by letting us know right in the headline that millions of kids are being shaped by know-it-all voice assistants. Those would be the little, connected, always-listening boxes like Amazon’s Alexa and Google’s Home that sit unobtrusively on a side table in your home waiting to answer all your questions. Or order another case of toilet paper.

We have a few of the Alexa Dots in our household, and part of the fun is phrasing questions in a way that she understands. It’s great for little facts such as, “how old is Patrick Stewart”, but not very good at more in-depth questions.

Our daughter also has an Alexa Dot in her bedroom. She loves to listen to Spotify, but we don’t allow her smartphone or laptop in her bedroom, so the Dot is a nice way to give her access to the music she wants. In this manner, it’s just a music player. I don’t know how much she asks questions to it, but I do know that it doesn’t keep her up at night.

As with all new technologies, there is a sense of fear and dread. Luckily, humans are pretty resilent, and after a short honeymoon, usually use the technology for good. Usually…